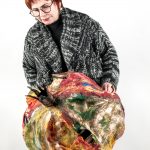 The pomegranate is dated back to the early days of creations, as many scholars believe the pomegranate was the forbidden fruit in the Garden of Eden.  Its’ importance has been recorded in ancient Babylon and Egyptian cultures; in Greek Mythology, Hinduism, Buddhism, Christianity and Judaism, as one of the fruits which the scouts brought to Moses to demonstrate the fertility of the “promised land”, as well as being a decorative element in the priestly garments in the Temple in Jerusalem.